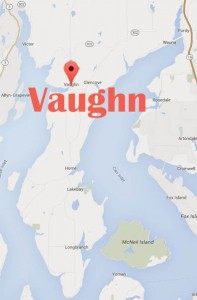 In 1852 William Vaughn made the first land claim on the Key Peninsula. Today the town of Vaughn (map) now bears his name. Early homesteaders were the Olson, Davidson, Van Slyke and Coblentz families. Olson was a potato farmer and Davidson grew plums and dried them for prunes. Van Slyke and Coblentz were good friends and had traveled together from Kansas in 1886. After they arrived here, they mutually agreed that Van Slyke should run the sawmill and Coblentz should tend the store.

In 1893, the community built a dance floor for the Fourth of July celebrations. Van Slyke donated land behind Coblentz’s store and provided lumber from his mill. A year earlier, Vaughn’s men had organized a horticultural society and purposefully prevented women from joining. So the women decided to establish a library association and they excluded the men in return. The library hall was built in 1894 by adding walls and a roof to the dance floor. The library closed in 1958, but the library hall still remains today.

Van Slyke sold his sawmill to Reverend Applegate in 1897. Before the sawmill burned and he ran out of money, Applegate built the Vaughn Bay Community Church, which is also called the “Chapel by the Sea” because of its bayside location. 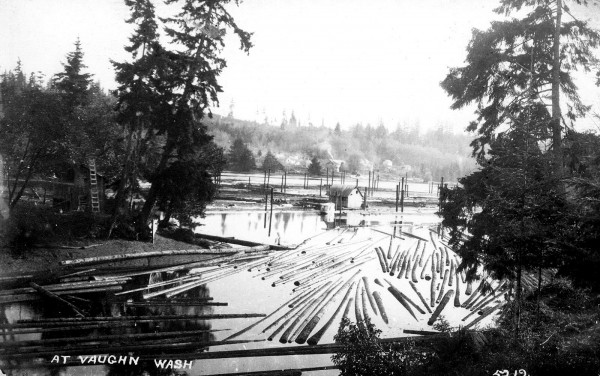