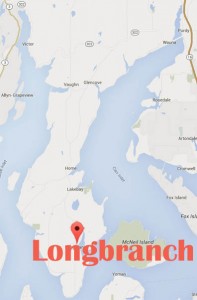 The settlement of Longbranch (map) was named for Long Branch, New Jersey, a resort town on the Atlantic Ocean. In 1889, Edward Yeasell wanted to duplicate that resort on the Pacific side. Although his plan failed, Longbranch received its name (which was changed to a single word by the post office in 1894 to avoid delivery confusion with the nearby Long Beach).

Longbranch sits on the beautiful Filucy Bay (with two stories about how it was named). The first hut on the Key Peninsula was built here by the French Canadian, Pierre Legard in 1848. As was common in those days, he had a native spouse from the Haida Tribe and her name was Filucy. Another explanation has the bay called Tetusi on the early charts of the 1841 Wilkes mapping expedition and Filucy may be an interpretation of this name.