In 1896, the Allen, Verity, and Odell families purchased 26 acres of land on the northwest side of Von Geldern Cove and called their new place “Home City” (map). In 1897, the first three families entrusted their original 26 acres to the newly incorporated “Mutual Home Association.” The Dadisman family added 64 acres in 1899. 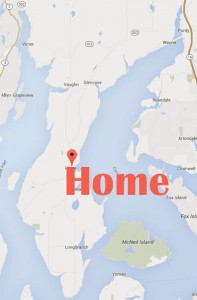 The association provided two acre plots for use by newcomers, but retained ownership of the land as a way to significantly reduce the tax burden of landowners. This cooperative arrangement frustrated the tax assessors in Tacoma.

Working in the collaborative spirit, early Home families quickly built a community of houses, stores, social halls, hotels, schools, post office, telephone exchange, and baseball grandstand. A long tradition of alternative publications espousing the Home resident’s philosophies have been printed from Home and distributed all over the United States and parts of the world. 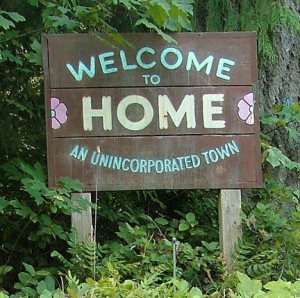 These extremely radical viewpoints put Home on the map as a “colony of anarchists.” When President McKinley was assassinated in 1901 by a professed anarchist, Tacoma newspapers and churches called for an end to the Home community.

In addition to unavoidable mob violence, Home suffered through a number of court trials. Lois Waisbrooker, 75 year old author, and Mattie Penhallow, Home’s postmistress, were both indicted for sending “obscene materials through the mail!” The material in question was an article on the sexual revolution and Home’s new post office was closed in 1903 as punishment for the whole community.

Jay Fox, newspaper editor, was convicted of inciting “disrespect for the law” when he wrote about nude bathing. The U.S. Supreme Court turned down his freedom of speech appeal in 1913. Lastly, the Home Mutual Association was dissolved by court order in 1921, when the state government changed the law to make cooperative land holdings illegal.

Plots were then sold back to the residents and Home became like every other small town on the Key Peninsula.