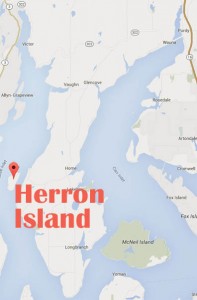 A little over a mile long and about a half mile wide, Herron Island lies in Case Inlet across a narrow channel about 3 miles west of Lakebay. Its history comes to us in fragments. Its name in Lushootseed, the language of the native people in south Sound was s√xwádač, “beach where when the tide goes out,” a description that today’s island residents can appreciate.

Lt. Peter Puget, who surveyed the south Sound in May 1792 on orders of Capt. George Vancouver during the Vancouver expedition (1791-1795), referred to the island as Wednesday Island in his journal, after the day he and his crew camped there overnight to avoid a powerful storm. That was never the island’s official name. It does not appear on Vancouver’s charts; Vancouver named very few geographical features in that part of Washington’s inland sea.

Puget Sound was resurveyed in 1841 during the United States Exploring Expedition under Lt. Charles Wilkes (1838-1842). Wilkes named or renamed over 250 places in Puget Sound; he named the diminutive island after Lewis Herron, one of the expedition’s barrel makers.

There is no evidence that native people lived on the island; the closest native village was near present-day Allyn at the head of Case Inlet and was occupied by the Squaxin band, a name that would later be used by the U.S. government to designate collectively all the tribes living in the inlets of southwest Puget Sound. Case Inlet was the fishing area of the original Squaxin, and it is very likely that they fished and harvested shellfish on the island’s beaches.The first documented European settler on the island was Swiss-born Charles Emil Pack, who received title, known as a patent, to a 92-acre claim in the northwest part of the island in 1873. Pack, who had no family, lived in a shack on the island until his death in 1898.

In 1888 Julius Sunde, a Norwegian immigrant who had just arrived to Puget Sound a year earlier, filed a homestead claim for 160 acres adjacent to Pack’s property. Sunde received a patent for his claim in 1894. He did not stay on the island long, however; in 1899 he sold his property to fellow Norwegian Søren Kielland and Kielland’s American wife Anna, who lived in Buffalo, New York.

By 1905 Søren and Anna Kielland had acquired the rest of the 260-acre island, although they never made it their home. Their nephew William Beyer, his wife Marie and their daughter Dagmar lived there as caretakers starting around 1907 until 1935.

From 1921 to 1925 William served as postmaster for the mainland village of Herron across the channel. The only house on the island, where the family lived, doubled as a post office. In 1925 the Herron post office closed and mail was handled by the Lakebay post office.

In 1935 the island was sold to Dr. H. J. Green from Seattle and his wife Dorothy; the Beyers moved to Herron Road in Lakebay, about a mile up the hill from the island, where they spent the rest of their lives. They are buried in Lakebay Cemetery.

The Greens rarely visited the island, and in 1944 they ended up selling it to entrepreneur George Murphy and his wife Blanche. In 1947 Murphy, perhaps realizing the value of the island’s virgin timber, in turn sold it on contract to Everett Hayes, a logger from Whidbey Island. Murphy and Hayes quickly became embroiled in a contract dispute and the property reverted back to Murphy.

In 1951 the Murphys put the island up for sale again. The buyers this time were Port Orchard logger Bill Sehmel and his wife Gyda. Over the next few years Sehmel, his son Charlie and their crew successfully and profitably harvested over 90% of the island’s timber.

By the mid-1950s that timber was depleted, and the island changed hands one last time when Sehmel sold it to a group of developers headed by Richard A. Clifford and his wife Edith, who had earlier developed the area on the shores of Lake Tapps in east Pierce County. For the first time in its history the island was subdivided and platted, power was brought in, a water system was installed and a ferry, the Annabelle S., was put in operation. In 1958 the island was incorporated it as a membership association and was transformed into the private community of almost 400 homeowners it is today. About 150 owners live on the island year round; the rest enjoy the island as a weekend or a vacation getaway.

An earlier version of this article appeared in the Key Peninsula News. © Joseph Pentheroudakis 2022; used with permission.