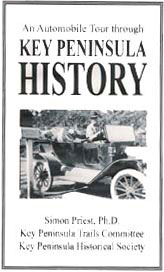 This map shows the 50 mile historical route that connects almost 120 points of interest on the Key Peninsula. The asterisks (*) mark those places where six interpretive signs detail the history of the local areas. Call in at the museum to receive a free brochure or to purchase the inexpensive 80 page guide book with maps, directions, photographs, and descriptions.

This place has the Key Peninsula’s earliest history. In 1792, the Vancouver expedition was exploring this area for the British Government. Peter Puget and his men were mapping this part of the sound that now bears his name. After being followed by local members of the Squally Tribe for several days, they were the first white men to meet and befriend local natives while fishing here at the Minter Cove sand spit on May 21st.
Minter Cove has always been rich in food. The Minter family from Nebraska moved to Horsehead Bay on the east side of Carr Inlet from here in 1882. Disappointed with the lack of food and deep forest at that time, they moved to Minter for farming the next year. They got along well with the visiting “Indian” population, who frequently camped on the spit and dried Salmon or collected shellfish and berries, depending on the season.

By 1884, several other families had moved here and Lucinda Minter began a school in her home. She started the post office the following year and George Minter built a hotel in 1888. By the turn of the century, Minter had a steamer dock, logging railway, saloon, blacksmith shop, shingle mill, social hall, brick kiln, and several stores. The oyster farm was started in 1931 and the salmon research hatchery was added in 1937 after the town had all but disappeared.

Glen Cove was originally called Balch Cove after early resident Billy Balch and Captain Lafayette Balch founder of Steilacoom. Harry Winchester logged this area in 1870 and captained the “Messenger.” This flat-bottomed sternwheeler would simply beach itself in the mud to load and unload supplies and then wait to be freed by the rising tide. Later, a wharf was built for steamers to dock outside the cove. Clum’s Store on the wharf was where the post office started in 1891 and the name was later changed to Glen Cove to avoid confusion with another Balch Cove in Washington state.

Nicholas and Agnes Peterson, German immigrants, moved here from Nebraska in 1884. Nicholas worked in logging with Winchester and Agnes cooked for the loggers aboard a wannigan or floating logging camp. Winchester owed the Petersons money during the depression of 1893, so he deeded some of his land to them and they built the hotel in 1896. The hotel provided accommodation for “drummers” who traveled the Key Peninsula selling an assortment of wares. The hotel closed in the 1930’s as automobile traffic increased with the building of better roads. Today it is a bed and breakfast.

In 1852, William Vaughn made the first land claim on the Key Peninsula on the south side of the bay that now bears his name. Early homesteaders were the Olson, Davidson, Van Slyke and Coblentz families. Olson was a potato farmer and Davidson grew plums and dried them for prunes. Van Slyke and Coblentz were good friends and had traveled together from Kansas in 1886. After they arrived here, they mutually agreed that Van Slyke should run the sawmill and Coblentz should tend the store.

In 1893, the community built a dance floor for the Fourth of July celebrations. Van Slyke donated land behind Coblentz’s store and provided lumber from his mill. A year earlier, Vaughn’s men had organized a horticultural society and purposefully prevented women from joining. So the women decided to establish a library association and they excluded the men in return. The library hall was built in 1894 by adding walls and a roof to the dance floor. The library closed in 1958, but the library hall still remains today.

Van Slyke sold his sawmill to Reverand Applegate in 1897. Before the sawmill burned and he ran out of money, Applegate built the Vaughn Bay Community Church, which is also called the “Chapel by the Sea” because of its bayside location.

In 1896, the Allen, Verity, and Odell families purchased 26 acres of land on the northwest side of Von Geldern Cove and called their new place “Home City.” In 1897, the first three families entrusted their original 26 acres to the newly incorporated “Mutual Home Association.” The Dadisman family added 64 acres in 1899. The association provided two acre plots for use by newcomers, but retained ownership of the land as a way to significantly reduce the tax burden of landowners. This cooperative arrangement frustrated the tax assessors in Tacoma. Working in the collaborative spirit, early Home families quickly built a community of houses, stores, social halls, hotels, schools, post office, telephone exchange, and baseball grandstand. A long tradition of alternative publications espousing the Home resident’s philosophies have been printed from Home and distributed all over the United States and parts of the world. Newspapers, books, and public lectures regularly addressed topics like: freedom of speech, world affairs, workplace conditions, equal rights, marriage enslavement, women’s suffrage, free love, diet, yoga, music, drama, emancipation, open religion, atheism, agnosticism, and lifelong learning.

These extremely radical viewpoints put Home on the map as a “colony of anarchists.” When President McKinley was assassinated in 1901 by a professed anarchist, Tacoma newspapers and churches called for an end to the Home community. In addition to unavoidable mob violence, Home suffered through a number of court trials. Lois Waisbrooker, 75 year old author, and Mattie Penhallow, Home’s postmistress, were both indicted for sending “obscene materials through the mail!” The material in question was an article on the sexual revolution and Home’s new post office was closed in 1903 as punishment for the whole community. Jay Fox, newspaper editor, was convicted of inciting “disrespect for the law” when he wrote about nude bathing. The U.S. Supreme Court turned down his freedom of speech appeal in 1913. Lastly, the Home Mutual Association was dissolved by court order in 1921, when the state government changed the law to make cooperative land holdings illegal. Plots were then sold back to the residents and Home became like every other small town on the Key Peninsula.

In 1871, the William Creviston family homesteaded here and named Lakebay and Bay Lake for their close proximity to each other. Sarah Creviston was the first teacher at the school near here in 1878, and their son was the first white child born on the peninsula.

The cemetery here holds the graves of early settlers, local business people, and some of the first residents from Home across the bay. The most notable was Henry Tiedeman, who gave land for the cemetery and was Lakebay’s first postmaster in 1882.

The Key Peninsula was built on the back of the Mosquito Fleet. Named for looking like a swarm of mosquitoes, these steamboats and sternwheelers served the developing communities by transferring lumber, groceries, freight, mail, market goods, and passengers around the sound as far as Seattle and Tacoma. About half these boats were built or based out of Lakebay under ownership of the Lorenz-Berntson Navigation Company.

Lorenz arrived here in 1875 and built a sawmill powered by water from Bay Lake. He built several boats, initially to carry finished lumber to Tacoma. Later, many of these boats provided an early ferry service throughout Puget Sound. Building with the lumber from the mill, the town quickly grew by the 1920’s to include houses, stores, churches, a cemetery, post office, telephone exchange, pool hall, and barber shop. Some of the buildings have come and gone: the Cooper Hotel (Dolly Cooper’s House and holiday cabins still remain), The Western Washington Poultry and Egg Coop (now the marina), and a dance hall that later became a roller skating rink!

Longbranch was named for Long Branch, New Jersey: a resort town on the Atlantic. In 1889, Edward Yeasell wanted to duplicate that resort on the Pacific. Although his plan failed, Longbranch received its name (which was changed to a single word by the post office in 1894 to avoid delivery confusion with the nearby Long Beach). Longbranch sits on the beautiful Filucy Bay (with two stories about how it was named). The first hut on the Key Peninsula was built here by the French Canadian, Pierre Legard in 1848. As was common in those days, he had a native spouse from the Haida Tribe and her name was Filucy. Another explanation has the bay called Tetusi on the early charts of the 1841 Wilkes mapping expedition and Filucy may be an interpretation of this name. The first wharf was built here in 1885. It served as a dock for steamers and sternwheelers of the Mosquito Fleet. From 1922 to the 1940’s, it was a ferry landing for service from Steilacoom to Longbranch via Anderson and McNeil Islands. The dock area contained a post office (1890), two stores (1886 and 1893), a fruit farmer’s cooperative store (moved here in 1907 and collapsed into the water in 1928), a community church (built in 1908, condemned in 1934) and a hotel (built in 1889 and moved to avoid subsidence in 1934).